Well, I can’t believe it but I actually managed to pull it off. I stayed up for 24 hours. Not only did I plow through it, I genuinely enjoyed myself. I’ve heard that Vegas hotels pump oxygen into the air, which I am sure aided me in my all night excursion. Too bad most of the positive benefits of all that extra O2 is negated by the amount of cigarette smoke swirling in the atmosphere! I always view Vegas as a great check back to whats really going on in the rest of our country, since LA seems to be a microcosm of attractive actors and rich people who pay a lot of money to look 20 years younger. There are “normal people” here as well- obviously- like me and my friends. But the ratio weighs heavier on the handsome folk.  Alternatively, Vegas attracts many different types. Albeit some are gorgeous, but the ratio seems more of an actual representation of the “real world”, and I am just amazed at how many people smoke! Ew. Just gross.

was a Nobu catered feast, followed by dancing like rockstars into the vampire hours at the Omnia nightclub in Ceasar’s Palace. Sadly, no sighting of Stefan, Damon, or Edward. But there WAS sighting of Calvin Harris. Right in front of us, in fact, because we were honored with VIP “seating” in the DJ section! Not gonna lie, the view from the top was amazing.

Omnia was nothing short of spectacular. Inside feels like The Fifth Element meets Cirq Du Soliel – except the patrons are actually in it rather than viewing it. Theater of the round is the theme, with the DJ smack in the middle. Gymnasts hang from ropes and dancers stand on columns, inspiring moves for the crowd. Multiple levels and areas allow for plenty of patrons to enjoy themselves. Despite ample space, the place gets PACKED. I didn’t even dare leaving our coveted booth to go to the restroom. The DJ area was comfortable with plenty of space to dance :). If you’ve saved up enough for a bottle service area- I would highly recommend it. The drinks were delicious and they kept them coming- with plenty of water to restore and hydrate. Some shots of the inside:

Love this shot taken by MSM. This club was just so cool.

Dancing the night away in the DJ booth at Omnia night club, Ceaser’s Palace. 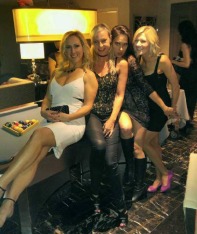 was more mellow. Pool and Pizza in Darren’s suite followed by some table play in the casinos. I had never been to a penthouse suite in Vegas before and this did look just like in the movies! Yep, the pool table was in the room and the view was divine from every window. It was FREEZING last weekend, and raining- both rare for the area, which is why we all decided to stay in. After dinner we went down to the MGM casino to play some craps. I made it through one round of the Wheel of Fortune slot machine and was ready for bed by midnight. I guess one night of Vampire is all I can handle. So far….Once bitten I am sure it will get easier ;).

What the heck to wear in Vegas in April:

Okay boys and girls. Enough with the sweat pants and velour jogging suits. We are not 70 years old and Juicy Couture is out of business. I’m not saying we need to dress up like in Pan-Am (the show), but I want to 86 the sweats. Unless they are tailored somehow. On the opposite end, WHY do some women insist on wearing high heels to the airport?! Honey’s, your feet SWELL on planes. Don’t do anymore damage than you need to. Designer sneakers are in now. Take advantage. Also they are easy to slip off and on before and after the security check. AND they are easier to run in – in case you have a connecting flight you have to catch 30 seconds after your delayed premier flight lands. Just saying.

So even if the dress code says “business casual”, in Vegas that is a lie. Cocktail attire. And nothing fit-n-flair unless it has some “vegas umph” to it- meaning sex appeal. Cut outs, spaghetti straps…something. We saw this girl in a gorgeous fit in flair dress with a scoop collar and short sleeves. The top was sequined and the bottom was white and flirty. Very pretty! But more appropriate for her nephew’s bar-mitzvah than a club in Vegas. I have noticed that we can get away with things in Vegas that would feel inappropriate anywhere else (other than the Playboy Mansion, may it RIP). If you wear something that is considered sexy in LA, in Vegas you will feel over dressed. And by over-dressed, I mean too much coverage. 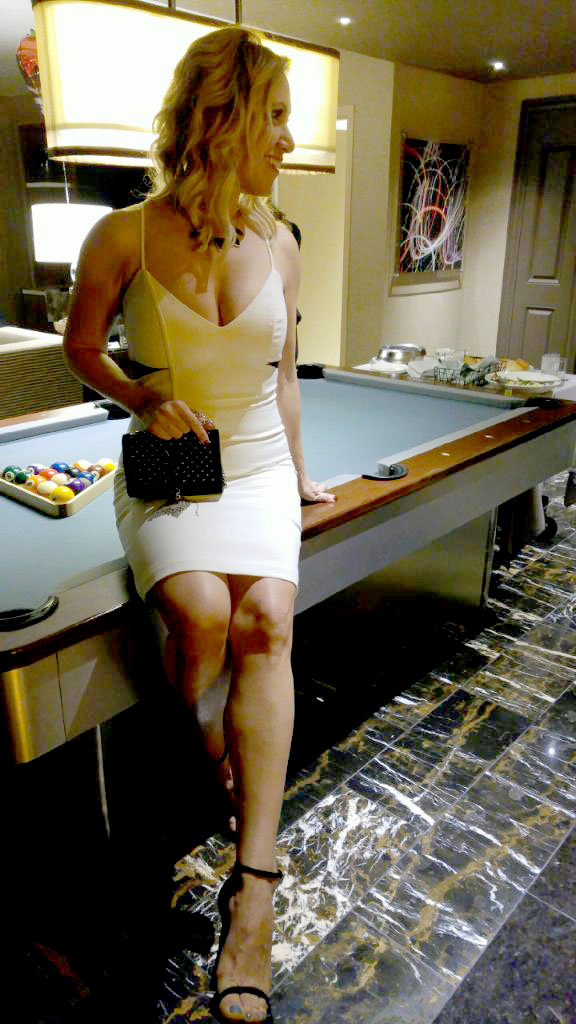 We had planned to go to Freemont Street, the “original” strip. I was super excited because I have never been there. Unfortunately it was just too damn cold! But this is what I had planned to wear, and as far as I know- is totally appropriate.

Partying like a rock star takes tolls, one of them being huge under eye baggage. I discovered (in a gift with purchase of all places!) the most AH-MAZING dark circle concealer! Maestro Eraser by Armani. I used #5, which at first I assumed would be too dark but it wasn’t. Its magic ya’ll. Magic! See for yourself.

Party on dudes! Sometimes staying young means fake it til you make it. I was nervous about pulling an energetic all night-er, but prepped my mind to just go with the flow and not only did I have a blast, I realized A. I’m not as old as I thought I was. Age really is mind over matter.  B. Its healthy to let loose every so often- no matter what age.  C. That armani concealer!!

PS Its taken me all week to recuperate. But I’m not saying I wouldn’t do it again ;).