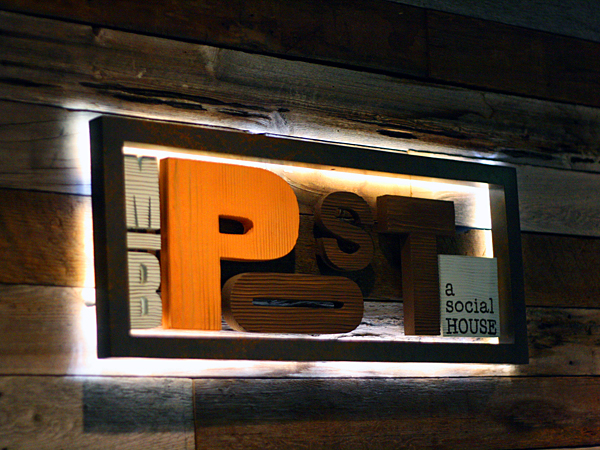 I’m not sure what has happened to LA but it seems overwrought with restaurants that are trying WAY TOO HARD. Its nearly impossible to find a spot that has deliciously clean food flavored with simple ingredients. Lately there is so much “deep fried brussel sprouts covered with shaved parmesan cooked with ham hock and simmered in a cream sauce” its no wonder Americans have an obesity problem. I’m tired of executive chef’s trying to be “creative” when all we really need is a delicious meal made from food that is not genetically modified from Chernobyl Farms and that tastes good. I had high hopes for MB Post because I heard great things about Owner/Chef David LeFevre, whose attitude is to bring home-style cooking to the public. When I looked on-line, I liked the look of the menu with its creative naming conventions; “eat your vegetables” for the veggie section, “Seafood…eat food” for seafood, “Meat Me Later….” and so on. I was also excited to venture somewhere a bit further out of LA and see what the scene was there.

Far enough away from the “keeping up with the joneses” of Los Angeles proper, this Manhattan Beach establishment converted from the original 1960s post office (such a fun idea!) was filled to the brim with friendly un pretentious, albeit hip, people clad in anything from sports gear to casually chic Saturday night clothes. The open kitchen was clean and well organized. The ambience felt lively and beach casual, despite the loudness (Warning: learn ASL if you actually want to communicate with your dinner guests here). Our waiter missed the three-minute rule by probably three extra minutes, but I’ll cut him some slack because the place was packed. The menu had plenty of choices without being overwhelming. Unfortunately, once the food was delivered it was just…..there. The soft shell crab, beautifully presented, was disappointingly soggy and practically meat-free. The broccoflower, which our waiter recommended, tasted like a salt stick. I did actually like the skirt steak, which was nice and crisp from the wood grill, perfectly pink inside, and covered lightly with a flavorful chimichurri sauce. My companion wanted more sauce but sadly by the time our leisurely wait staff checked on us, some 30 minutes later, the steak was almost gone. The green beans with pork was actually an exquisite combination though maybe not worth the 11$ price tag. It blows my mind these restaurants can get away with charging exorbitant prices for food that is just mediocre. Its not that the food here was horrible, some of it was basically good, just not THAT good. A lot of it was salty and greasy. Mostly it tasted like my college roommate smoked a J and decided to make something up in our kitchen using leftovers and then charged people enough to eat it for us to pay for a semester of tuition.

The hip vibe was cool and the menu was absolutely adorable with its kitschy little phrases. There were so many reasons I wanted this place to work. And it did, for drinks at the bar maybe. My spicy margarita was perhaps one of the best items on the menu! The wine was also quite piquant (not a huge wine list at MB Post but the choices are decent). If you are someone who wants a fun night out at a lively bar that has friendly people, above par bar food, and great drinks, MB Post could be the place for you. But if you are a foodie looking for an experience of exceptional service, party in your mouth fare, and a relaxed environment, look elsewhere.

**photos in this post were not taken by me.