A few years ago I went on a wine safari in south Rhone Valley with a guide who eloquently explained that in Europe dinner is not so much about sustenance, but more about connecting with people. He commented that the company one keeps affects our memories of how the food and wine actually taste. This sentiment was 100% apropos for my visit to the new Cleo at LA live. Its not that the food was bad, per say, and I wouldn’t necessarily deter someone from eating there if they were visiting LA live, but for the most part experiencing the Mediterranean fare at Cleo was plainly unremarkable.

Stark and imperial is one way to describe the ambiance at this new location. Brightly lit, sparsely adorned, and a bit sterile, the feel is much less intimate in comparison to the bold boudoir-esque climate at it’s sister location in Hollywood. Music seems to be playing, but only audibly enough to hear sporadically, making it more of a nuisance than enjoyable. Conversation is difficult, as the acoustics in the room create a loud hum and everyone’s voice becomes one big cacophonous overtone. It’s worth noting however, from the moment of entrance, the staff is very friendly and cheerful, an excellent juxtaposition to the chaos of LA Live.

With no Grenache or Chianti the wine list at Cleo is at the least limited, if not inadequate. Our waiter, Taylor, surmounted our frustrations over the wine limitations by serving a flight of their bold reds, which was accommodating and helpful in making a choice. The margarita was basic, clean and crisp but nothing to write home about. I should mention the management at Cleo will not allow you to buy a drink at the bar and transfer your bar tab to the table tab, which could be very annoying depending on what your plans are for the evening.

Taylor explained that the plates served would be “tapas style”; small but sharable. Our meal started with an in-house-made hummus topped with extra tahini, cumin, and a few scattered garbanzo beans. The hummus, accompanied by a warm lavosh served in a paper bag, arrived at the table in good time. The presentation was original and witty. The hummus itself was tasty, though once the toppings were mixed in, somewhat thin. Lesson learned: As my dinner partner pointed out, “don’t mix in the toppings”.

For our main course we sampled the scallops and the hangar steak. The scallops were actually delicious (though one was undercooked). The steak itself was flavorful though a bit overcooked for “medium” and did remind me of an in-flight airplane ration, albeit first class not coach. It was somewhat impressive for airplane food but not so amazing otherwise. The accompanying carrot purée, perceivably pumpkin sauce, was quite savory as was the side of fingerling potatoes. The staff politely checked on our table often, and engaged in entertaining but non-invasive conversation. From funny jokes to discussions of calligraphy, water fountains, and Caligula, my company and the staff most definitely made the meal more fulfilling.

As I took a walk around the restaurant, the clientele seemed to mostly consist of wealthy out of town-ers visiting LA Live, which makes sense. The kitchen was not as organized as others I’ve seen, and the women’s bathroom was a mess with paper towels overflowing everywhere. On my walkabout the hostess asked how I was enjoying my meal and the sous chef smiled as I passed by. The attentiveness of the staff here was definitely a nice touch.

Being somewhat of an introvert I often abide the law of Sartre,  “hell is other people,” but regarding Cleo LA Live the truth seemed contrary. It was the friendly staff and my company that made my evening complete. With that being said, the food was far from inedible and I’d say the prices were comparably moderate for the area. If you are at LA Live anyways it’s potentially better than some other options, but I definitely wouldn’t plan my night around eating there. I give it a C. 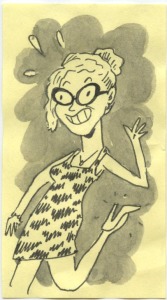